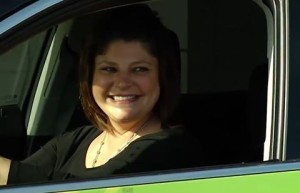 Ending the 2014-15 contest on a high note, Shorehaven Elementary School secured its second Jupiter Chevrolet Teacher of the Month two-peat, as physical education teacher Sara Erickson took the honors May 11. Surprised while writing curriculum at the Jill Shugart Professional Development Center, Erickson had a feeling she would soon receive the decked out SUV.

“I was told I had a lot of votes on Facebook,” she said. “Thank you to everybody who voted.”

With this win now under her belt, Erickson is officially part of a distinct, growing team at her campus.

“Sara is the seventh person at Shorehaven to be named Jupiter Chebrolet’s Teacher of the Month,” said Principal Patty Tremmel. “We have fabulous teachers who are very dedicated to the students of Garland ISD.”

Tremmel wants to make sure Shorehaven’s hard working staff is recognized, so she tries her best to inform the community about the contest, and actively nominates teachers every month.

“We use social media and have contest information on our website,” she said. “We want to honor the teachers, and this is a very special way to do that.”

Erickson will get to drive the meaningful SUV until the end of the school year.

Although the 2014-15 contest just wrapped up, a new campaign will kick off again in August. Want to see your campus represented and your favorite educator named Teacher of the Month? Keep up with the contest and vote for the next winner on Jupiter Chevrolet’s Facebook page<https://www.facebook.com/JupiterChev/app_632542793518072>.

North Garland High School’s Raider Theatre is being hailed as one of the state’s top drama groups. The talented company won second runner-up in the 6A UIL State One-Act Play competition May 28 at the University of Texas at Austin’s Bass Performance Center.

Previous: Important Flood Recovery Information for Garland Property Owners
Next: Now is the Time to Order Your 2015-2016 Season Tickets!‏