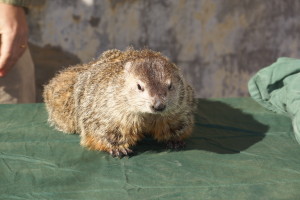 On February 2, 2015 a tradition that dates back hundreds of years finally made its way to Garland, Texas! Punxatawny Phil has been predicting whether or not spring will come early up in Pennsylvania for eons. But what does that have to do with the weather in Texas, thought garland businessman Robert Smith. He decided it was high time we enlist the services of our own groundhog to assist local meteorologists with their prognostication

Since groundhogs are not indigenous to Texas, Smith had to reach outside of the Lone Star State to find one of those hibernating critters, and he found one in Georgia. A kindly gentleman by the name of Tom Bennett, proprietor of a traveling zoo, agreed to escort the sleepy rodent to Garland so she could emerge from her winter home with ceremony comparable to her cousin Phil’s annual appearance.

An attempt was made to mimic the Pennsylvania ceremony, with top hats worn by Smith and local dignitaries, but our Garland presentation included a jazz band! The Mayor, Douglas Athas, read a proclamation declaring the Gretchen the Garland Groundhog had indeed seen her shadow when emerging from her hole that morning, concurring with her cousin Phil, that there would be 6 more weeks of winter before the arrival of spring weather.

Gretchen’s handler gave us a brief talk on groundhogs and posed for photos at 507 State Street in historic Downtown Garland., across the street from the city’s square. Tom Bennett stated during his educational talk, that the heart rate of the little beastie slows to 3 beats a minute during hibernation, and that the groundhog is the largest animal in the rodent family. Through it all Gretchen was perfectly calm and well behaved. Once she returns to Georgia she’ll resume her long winter’s nap. 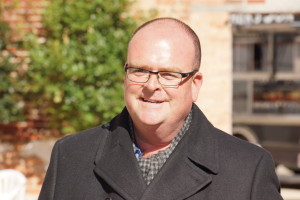 It was a chilly day in Garland, and so our First Annual Groundhog Day event was very cool in more ways than one. We thank Robert Smith for putting this event together and for giving us the opportunity to meet Gretchen, who we believe is just a bit cuter and more personable than her cousin Phil. We’re told she has agreed to come back for a replay next year; Gretchen’ got a gig!