Around Town in June 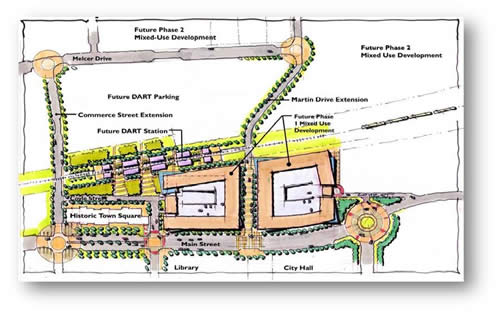 At the May 20 City Council meeting, a plan was approved that will basically reconstruct downtown Rowlett. The building on Main Street now housing the Rowlett Chamber of Commerce, which was formerly the First Christian Church, Ca. 1922, will be moved from its present location. The library building will be demolished and site preparation will begin for a wide range of residential and commercial development within walking distance to the DART station. According to current plans, the project will be completed by winter of 2016. The project presently underway and nearing completion is a pedestrian walkway leading up to and around the DART light rail station.

Once upon a time, Garland had a parcel of land behind City Hall, along the railroad tracks, known as Heritage Park. Situated on that public property were 3 historic buildings and an old dilapidated Pullman railroad car. When the City of Garland decided to make that parcel of land available for the construction of a new apartment complex, it had to relocate the Pace House, the Lyles/Tinsley House, and the refurbished Santa FE Depot a.k.a. The Landmark Museum and the railcar.

After many months of planning and deliberation, it was decided by the powers that be that 4 structures that were formerly known as Heritage Park would be morphed into Heritage Crossing and placed behind the library at Sixth and Walnut, along the DART tracks. The old Pullman car is now positioned near the depot and the Lyles/Tinsley House will soon follow. The Pace House, now stored on a trailer behind the Granville Arts Center, will become the property of Mr. & Mrs. Louis Moore and moved to a lot on Eleventh Street, in the newly proclaimed Historic District. Garland’s first ever Historic District is a two block stretch on Eleventh Street, between Avenues B and D. 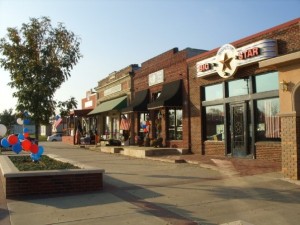 We sadly said goodbye to our favorite hamburger joint, Big Star Burgers. They closed their store on June 1 to make the premises available to the new owners of the property, who will operate a commercial bakery at that location.

A No-kill Animal Shelter for Garland?

Garlandite Mary Ann Wickersham has addressed the Garland City Council on two occasions regarding the need for a no-kill animal shelter. Rowlett has a no-kill shelter that has been quite successful; it is not operated by the City of Rowlett, but by an independent non-profit group. Wickersham has done her homework, and her argument is persuasive. She plans to form a team to study the Rowlett operating organization with the intention of bringing something similar to Garland. In the meantime, Wickersham is asking the City of Garland to reduce the kill rate by altering current procedures currently being followed by the administration of the Garland animal shelter.

Congratulations to Kitty and Lindsey Williams, the mother and daughter team who own and operate the Generator Coffee Shop in downtown Garland. Being voted one of the best in North Texas, it was featured in a recent morning broadcast on WFAA.

On a recent visit to Cotton’s Produce stand at Broadway and Rosehill in South Garland, we learned that the Cling peaches are in! Rose told us she’s ready to share her no-fail recipe for cobbler made with those delicious Texas peaches! We learned that the Clings are the first to arrive, and later in the season the Freestones will follow. Cotton’s has been supplying area restaurants and families fresh produce for the past 38 years!

Previous: Garland Square Scenery: We Can Do Better
Next: Graduation Day for Garland Pre-K