Nineteen students in the School of Global Business, Language & Leadership (GBLL) magnet program recently enjoyed a behind-the-scenes tour of two hometown establishments. The Sellers Middle School and Naaman Forest High School students visited Garrett Metal Detectors and Resistol Hats March 18, learning about business practices in their own backyard.
“One of our goals is to provide these students with an understanding of business within a global context, and many of our students have never visited a company,” said GBLL advisor Tracy Glick. “The tours provided a foundation in business and helped reinforce entrepreneurial concepts learned throughout the school year.”
Organizing the trip with both middle and high schoolers further strengthened those notions. The four Rangers acted as mentors to the 15 Sharks, offering a chance to collaborate with and learn from fellow magnet peers.
“The high schoolers encouraged their middle school counterparts to participate in activities and modeled professional behavior,” noted Glick. “The middle schoolers enjoyed working with their older counterparts, and had the opportunity to learn what GBLL is like throughout high school.”
During the outing, the group saw entrepreneurship, international sales and marketing ideas put into real-life practice. In addition to a tour, the students tested out both company’s products and even took time to develop leadership skills during a special stop at another professional landmark.
“The Garland Chamber of Commerce was generous to accommodate us with the space we needed for our lunch break,” Glick explained. “We took that time to participate in various activities, one of which required two students to stand on a small piece of carpet and flip it over without stepping on the floor. The students worked creatively to try to solve this challenge, and learned how to work together with others to tackle it.”
That interactive break proved to be one of the most popular and powerful moments of the day.
“This field trip was a profound learning experience. My favorite part was lunch at the meeting center, bonding with fellow students and practicing team-building exercises,” said eleventh-grader Gabriel Juarez. “This trip opened by eyes to the key factors in a successful business—the most important being teamwork. I will never again forget the necessity of working together.”
Story photo courtesy of Tracy Glick.
City of Garland seeks input from GISD students 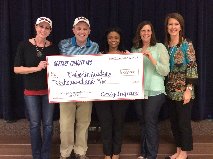 Giving teens the opportunity to influence city politics, Garland is inviting district students to participate in its Teen Talk and Youth Council. Teen Talk will be held from 9 a.m.-2 p.m. April 11 at the Plaza Theatre.
This free leadership training and town hall meeting will include lunch and a tour of downtown Garland. All high schoolers who live in the city are eligible to attend. Visit the Youth Council website for more information.
While there, students can also apply for the 2015-16 Garland Youth Council term. This group works to make sure the needs and wants of Garland youth are heard throughout the city. Participants also learn about the political process and get to know city officials. Applications are due by May 1.
Kimberlin Academy, Weaver Elementary receive donations for trip of a lifetime

Kimberlin Academy for Excellence and Weaver Elementary School were recently the lucky beneficiaries of monetary gifts. Kimberlin received a $5,000 endowment from a generous community member, while Weaver accepted a $2,955 check from a charitable middle school club. Both donations were made with the intention of sending students to the special needs-focused theme park Morgan’s Wonderland.
“I was overcome with emotion when I learned we received the donation,” said Kimberlin Principal Tyisha Nelson. “When I received the check, I cried tears of joy. We have been working very hard this year to raise funds for this field trip.”
Craig Ingram, president of the Plano-based Special Organization Founded to Aid Special Kids board, is the person behind Kimberlin’s contribution.  Ingram’s wife, who learned of Kimberlin’s fundraising efforts in the fall, sparked the meaningful surprise, which was presented during a February assembly.
“Morgan’s Wonderland is an exceptional place and the first of its kind. While other theme parks accommodate people with disabilities and special needs, Morgan’s was created with them in mind,” Nelson commented. “Our students will have access to things they could not participate in before. This park has thought of all those voids and unlocked a whole new world for each student through accessible play, sensory stimulation and social development the whole family can enjoy.”
Like the Knights, Weaver’s Eagles will also get that memorable experience, thanks to an unexpected sponsor—the Sam Houston Middle School National Junior Honor Society (NJHS).
“My son is in the Preschool Program for Children with Disabilities (PPCD) class at Weaver,” said Sam Houston special education teacher Melissa Mains. “This year, they wanted to go to Morgan’s Wonderland, but it does have a lot of cost associated with it. We knew there would be a little bit of an issue raising enough money.”
To help the cause, Mains’ husband started a GoFundMe page and informed Principal Don Hernandez about it. Hernandez then alerted science teacher and NJHS sponsor Teresa Walker.
“When I found out that finances could possibly keep Weaver’s students and parents from going to San Antonio, that just touched my heart,” Walker explained. “From that moment on, I thought my kids could do this as their service project.”
Walker set a goal of $2,500 to get Weaver halfway to their aim of $5,000. Through candy sales and casual dress days from October to February, the group collected much more than they expected.
During a celebratory breakfast gathering March 3 at Sam Houston, Walker and NJHS members presented Weaver’s PPCD class with a 6-foot check. The festive occasion offered the middle schoolers an opportunity to meet the students they supported.
“It was really nice to work on this project,” said eighth-grader Alma Juarez. “It is really emotional knowing that we are helping these kids go on a field trip.”
“I learned that you always need to help someone because you can be in the same situation in the future,” added fellow NJHS member Norma Rodriguez. “We wanted everyone, parents and children, to go on this field trip. I really like to do this, help others. It feels amazing.”
And it felt amazing for the Weaver crew to be the recipient of that kind act.
“I was absolutely thrilled when they announced their donation. I cannot believe a middle school did this for us,” said Weaver special education teacher Sheila McComas.  “I hope they know how much we appreciate them. We are now able to take one parent with each child, and it is a wonderful, wonderful thing they have done for us.”
Weaver’s Morgan’s Wonderland adventure kicked off April 8. Kimberlin’s Applied Learning Environment students will embark on their trip April 21-23.
Austin Academy, Sachse HS robotics teams to compete at worlds

Showcasing 21st-century STEAM learning, five Garland ISD robotics teams have qualified for theVEX Robotics World Championship April 15-18 at the Kentucky Exposition Center in Louisville, Ky. For the first time ever, Sachse High School will represent GISD alongside veteran worlds participant Austin Academy for Excellence at the intense international competition.
“It is an amazing feeling and experience to qualify for worlds,” said Austin Academy science teacher and robotics sponsor Corey Bankston. “During the 2014 season, my boys worked more than 2,300 extra hours as a group from August to April to reach worlds once again.”
Three Austin Academy-based teams will control and direct their personally designed robot in pursuit of the title. Group 7504E will make its third appearance, with 7504X making its second and 75040Z unveiling its debut. Sachse High School’s 5408A and 5408F teams will spar alongside their younger peers, hoping to make Mustang history.
Although all teams are hosted by Austin Academy and Sachse, students from other GISD campuses have also contributed to this feat.
“7504E is made up of my two most experienced veterans, Evan Anderson and Tien Tran. They were members of my first team to compete, and despite going to Sachse and Garland high schools, they wanted one more year together to try and pull-off their third straight appearance at worlds,” Bankston explained. “75040Z originally consisted of 7504X’s John McKelvey, so we had to recruit a new driver. We chose Anderson’s younger brother, Keeley Elementary School fourth-grader Eric Hritz.”
The long road to face 15,000 participants from 28 countries was difficult, but satisfying. Austin’s teams won 25 titles, while Sachse’s snagged 10. Their impressive performances have garnered recognition across the district and community. 5408A and 5408F were even acknowledged during the April 6 Sachse City Council meeting.
Now that these tech-savvy teams are approaching game day, Bankston and Sachse’s sponsor Michael Roha are not only focusing on awards, but also the long-term benefits of competition.
“The majority of these kids want to become engineers, and being involved with robotics will certainly help them achieve their goal,” Bankston commented. “But the life skills they have learned are far more important. They have learned how to work as a team, interview and strategize. Communication and negotiation skills, time and project management, and a positive self-esteem have also been developed. Overall, I am beyond proud of these guys and appreciate all of the hard work they have devoted to Austin’s program. They mean the world to me, and I know they all have bright futures ahead.”
Story photo courtesy of Corey Bankston and Jennifer McKelvey.

Previous: How Texas Could Lead America in Greenhouse Gas Emission Reduction – Why SB 12 Must Pass
Next: April Updates‏