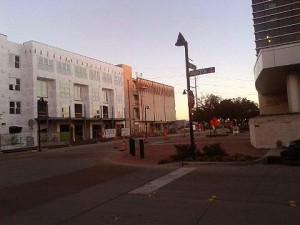 The New Year is beginning with all sorts of news from the City of Garland’s City Hall. Soon the building itself will be incognito, as it will look like an extension of the newly constructed Oats 5th Street apartments when the job is completed. Tenants in those new apartments will have a short walk across the street to enjoy the plays, symphony, and other events and performances at the Granville Arts Center. Commuters will have a one block walk to the DART station and the public library. A short stroll in the opposite direction will take them to downtown Garland and the stores and restaurants located around the historic square.

Speaking of the downtown square, the City Council has voted in favor of filling in the black hole that was originally designed to be a water pond with a water feature in the center of the lower level of the square. The water would be recirculated from the fountains above, at street level, if things had gone according to plan. We were told that the water had been turned off due to the drought, leaving a big, dry black hole that was both unsightly and dangerous. Work to fill in that hole should be completed before spring events begin. We are of the understanding that the hole will be topped off with a flat concrete surface.

Maintenance of the downtown square is the responsibility of Garland’s Parks, Recreation and Cultural Services Department. Jim Stone, Managing Director is retiring, ending a 32 year career with the City. There will be a retirement party at the Granville Arts Center on January 29. His department is responsible for the Firewheel Golf Courses, The Granville Arts Center, the Senior Activity Centers, all parks and plantings on City property, and greenhouses. That list is definitely not complete, but it does show just how much diverse territory this department has to cover.

The Eastern Hills Country Club property sits sadly deserted behind padlocked gates, awaiting its fate. Purchased last summer at auction on the bankruptcy court steps, it remains the subject of heated controversy. It was purchased by Victor Ballas and is now under contract to Henry S. Miller. The sale from Ballas to the developers is contingent upon zoning variances. The Club Creek HOA is waging a campaign to prevent redevelopment of the property. The old clubhouse is now boarded up and deserted and thieves are nibbling away at the structure,; stealing anything they can pry loose. According to the caretaker, his boss, Victor Ballas, just wants to sell the place. Without the COG’s issuance of the necessary zoning variances, that probably can’t happen. Have those folks who are so passionate about preventing development considered purchasing the property? It should be noted that the most vociferous opponents to development, the Club Creek HOA, represent a very small housing development on the northeast corner of the golf course. Lots of ideas and a sprinkling of vitriolic nonsense can be found online at: Eastern Hills Nextdoor.com.