A resident of Garland for the past 19 years, James Hart, 66, is the author of a book entitled, “Urban and Wilderness Emergency Preparedness”. The book, which Hart refers to as his life’s work, contains over 500 pages and covers every conceivable type of emergency and disaster. The book is essentially a “how-to” guide to survival.

Growing up in Utah, James Hart and his brothers did a lot of hiking and camping in the Uinta and Wasatch mountain ranges that embrace Salt Lake City. Those boyhood experiences, in addition to being raised in the Mormon culture that stresses disaster preparedness, no doubt set Hart on the path that eventually led him to the writing of the book.

While serving in both the U.S. Navy and later in the U.S. Marine Corps, Hart survived a stint as an intelligence officer, dodging sniper fire in the jungles of Vietnam. Following his military career, he returned to scouting, serving as Scout Master and Venture advisor, earning the Baden Powell Award. 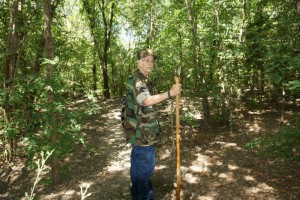 His many adventures include sailing the Pacific Ocean and crossing the Equator. When asked to fill us in on the details of his crossing, Hart gave us the following colorful account of his voyage:

The first time I crossed the Equator, it was during my first trip to ‘Nam, I was on the carrier Ticonderoga CVA14. We were headed to Hong Kong and had to delay a week or so because the Russian Navy was there and we couldn’t go into Port until they were gone. We detoured to the Equator to waste time. They called you a “pollywog” if you had never crossed before, and a “shellback” if you had. The initiation ceremony for crossing was as follows: (remember this was an aircraft carrier with full air wing and crew of 4000) ALL garbage from the Mess Deck (Eating Quarters) was brought to the Flight Deck and filled a chute about 3 foot diameter 60 ft long. All shellbacks lined up with a paddle (one on each side) and the pollywog was suppose to run through the center of the shellbacks and then crawl through the chute of garbage and out the other end where other shellbacks were waiting with a fire hose to spray them down and congratulate them. It was a mess, and broke the tension, and strain of the war – released a lot of stress in a way. Kinda funny when you look back on it. I still have my certificate stored away in Utah.

Hart has visited 42 of our 50 states and traveled extensively abroad in both Europe and Asia. He has camped in the Mojave Dessert, the Uintah Mountains of Utah and the piney woods of Texas. He’s in his element in the wilderness, regardless of terrain or climate.

Every year Hart spends the month of July in the mountains of Western Utah, practicing survival techniques and conducting workshops. His expertise as an outdoorsman includes such diverse activities as animal tracking, snaring, fishing, and snowshoeing. Tips on engaging in just about any outdoor activity safely can be found in Hart’s book. If a disaster strikes, he gives instructions on how to survive it. 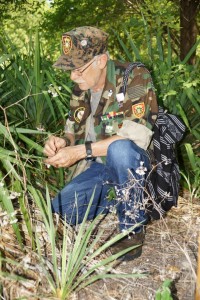 Hoping to learn from Hart, we invited him to join us at the Spring Creek Park Preserve on a steamy August afternoon. He greeted us wearing camo attire and carrying a large maple hiking pole. He guided us along a dirt path, pointing out edible vegetation and identifying animal habitations. We stopped at a yucca plant and were shown how to strip strings from a frond and twist them into sturdy twine. Further on down the trail, we stopped to count growth rings in a toppled tree trunk that had been cut to clear the path. We concluded that that gigantic old trunk was about 150 years old according to the visible growth rings.

Climbing a rocky ledge down to Spring Creek, Hart discovered stones with fossils and petrified wood. We were hiking and climbing in the nature preserve on a 100 degree day, yet the shade of the dense forest kept us reasonably comfortable throughout our expertly guided tour. Beneath the towering trees overhead, we were sheltered from the sun and sweltering afternoon heat.

James Hart is available for lectures and training sessions on survival techniques. In addition to his writing and book publishing, he will also be contributing a regular column published right here at the Garland Rowlett Messenger. Learn more about Jim and his book and classes at preparedwithJamesHart.blogspot.com

Previous: September Events at the Library
Next: Greatest Cleaning Tool is in Your Pantry