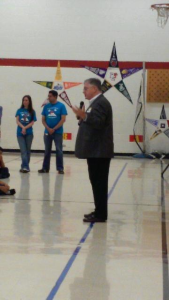 Thursday, May 14 was Career Day at Caldwell Elementary School and Garland’s Mayor, Douglas Athas was a guest speaker. He established a great rapport with the students as he discussed such popular subjects as skate parks and pop up dog parks. He explained that the dog park was a project that needed support from the citizens so that the City Council would vote in favor of making it happen. The students and faculty felt very honored to have the Mayor participate in their Career Day Program. They were also very pleased to have representatives from the Garland Fire Department participate in the program, bringing along a fire truck and ambulance as their “Show and Tell” contribution to the students’ day of discovery.  From the kids’ perspective, it no doubt looks like a lot more fun to be a fireman than a mayor, but their minds may have changed by the time they have to choose career paths. The presence of a female firefighter opened up a whole new world of possibilities for the girls in the student body. It was a great day at Caldwell Elementary School! 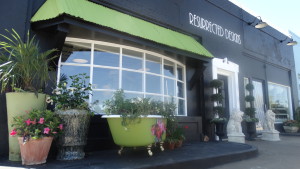 Emily Low, proprietor of Resurrected Designs in downtown Garland, was overwhelmed by the crowds that attended her first Urban Flea event in the vacant lot behind her store on Main and Seventh Streets. She plans to host the events on on every second Saturday of the month through November. Vendors specialize in crafts, vintage gifts and home decor items. We look forward to doing some browsing at the Urban Flea at the next event on Saturday, June 13.

Congratulations to Robert Selders, owner of the Crossfit Training Center in downtown Garland. Selders was elected to the GISD School Board, and will focus on improving and initiating programs to enhance student health.  Selders has proven to be an effective business leader and the GISD students are sure to benefit from his Board participation.

We would also like to congratulate Cotton’s Produce Stand at the corner of Rosehill and Broadway in South Garland on its 38th anniversary. Cotton and his family have been providing fresh fruits and veggies straight from the Dallas Farmers Market to residents and restaurants of Garland and neighboring communities since 1977. Stop by and say hello to Rose, who always has great recipes to share.

A new restaurant, the Rustic Ranch Grill, has opened in the shopping center at Broadway and Colonel. They describe their fare as “home cookin” and will be open for breakfast at  7am and will remain open until 9pm. They don’t plan on serving liquor, but customers are welcome to bring their own adult beverages. We recently had feedback from a party of 7, who all enjoyed dinner at the RRG. The party consisted of members of 3 generations, and all were delighted with their food and dining experience. The report from a 55 year old member of that party praised their chicken fried steak. A 2 year old licked her fingers happily as she enjoyed delicious chicken tenders. The 16 year old enjoyed the background music just as much as his blackened salmon entreé. See you there! 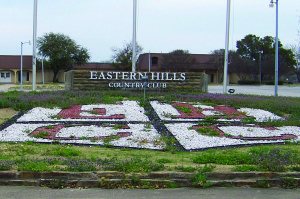 The development  of the Eastern Hills Country Club property, now owned by billionaire Victor Ballas, is yet to be determined. Developer Henry S. Miller has a contract on the property, but closing is contingent upon zoning variances. The City of Garland has retained a consulting group to study the property, which now consists of a clubhouse, tennis courts, swimming pool and 18 hole golf course. They are to present their recommendations for the best possible use of the property to the COG in late July or early August.  In the meantime, a group of over 1000 residents have signed a petition against overdevelopment. A working committee representing residents of the area is working with the consulting group to hopefully arrive at a mutually agreeable plan. We’ve been told that currently in discussion is a par 3 golf course, a miniature golf facility and a restaurant in the former clubhouse.  Of course, home sites would be situated around the recreational area. At this time we have no further details and can only wonder if this plan or anything comparable will be accepted by the owner or developer.

We recently attended 2 high school graduations at the Curtis Culwell Center, and were amazed to be required to pay a $10 parking fee on each occasion! We confirmed that the funds werebeing collected by the CCC, and retained by the Garland Independent School District.  How many guests were prepared to pay a $10 parking fee to attend a high school graduation, and how many others were turned away because they didn’t have that amount of cash on hand? Are we “off base,” in believing that it’s wrong to charge for parking?

Previous: The Drought Has Ended
Next: Are You Prepared? Here Are 10 Preparedness Tips To Help You