We have received a press release from the Huffines development corporation announcing a 600 unit apartment complex to be located along the President George Bush (190) extension.  Then there is the planned redevelopment of Robertson Park, recently acquired from the City of Dallas.  Additionally, the City of Rowlett is in the process of a massive development surrounding the DART station on Main St. Rowlett is booming!!

The Return of Lake Ray Hubbard 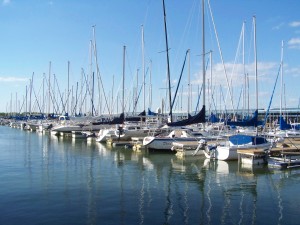 Due to the heavy rains our region has experienced, drought water restrictions have been lifted. Lake Lavon is full and nearing flood conditions, so the corps of Engineers has allowed water to flow from Lavon into the Trinity River and on into Lake Ray Hubbard. Dallas Water Utilities pump off of Lake Ray Hubbard, which is not yet up to normal levels. More heavy rain have been forecasted for our area, so chances are the lake will have fully recovered by the time our rainy season ends. The Achievement Center of Texas held their annual Special Arts Festival on Saturday, May 2nd  in an auditorium at Springcreek Church. This event had originally been held at the Curtis Culwell Center, but changed locations last year when they were told that the CCC had been rented out to SMU for every Saturday that year.  The new venue is a warmer environment, though not as easily accessed and quite a bit smaller. This year the event was  postponed due to a snow storm on its originally scheduled February date. This year’s event featured fewer artists, but offered great entertainment and free craft activities to those in attendance. Professional artists John Bramblitt  and Lucas Cerullini exhibited their work and the Garland/Rowlett messenger created an ACT Family Tree with leaves made of handprints. We thank ACT Director Marilynne Serie for organizing this celebration of the arts.

The First Annual Auto Show benefiting Hope Clinic was held on May 2 in downtown Garland. It was a lovely day weather-wise and the turnout was great for this first year event. There were a multitude of classic cars on display and an appreciative crowd to enjoy them. The event took place in and around the downtown square.

The National Day of Prayer took place at the Atrium in the Granville Arts Center at noon on Thursday, May 7.

The annual Cinco de Mayo celebration in downtown Garland will take place on Saturday, May 9th this year. In past years the event was contained in a small area in front of Dos Banderas Café & Cantina on Main Street. This year’s event will have a larger footprint, encompassing the area around the downtown square at Sixth and Main Streets.

We dropped by and introduced ourselves to the Brown Family, owners and operators of the Mobile Café parked on Walnut Street across from the DART station in Garland. The Dallas Morning News had already discovered them, and we were eager to sample their wares. When we arrived on Saturday afternoon they were sold out of those highly recommended bundt cakes we had read about. There were only smaller servings available for $4 each. The sign described them as ‘servings for 2”, and we were told that only pineapple, butter and strawberry flavors were left. We bought them all and I sampled the strawberry. The strawberries and glaze covering the top were fresh and not too sweet, and the pound cake was divine! Before I knew I had scarfed down the whole thing and loved every single bite! The food truck is parked up off the street, on a small vacant lot with chairs and tables scattered about for those who want to dig into the chicken, cakes and other offerings right then and there.  If the other menu items are as good as that strawberry smothered pound cake, you’ll be in for a real treat!!!

A few weeks ago we chatted with Garland’s Mayor over breakfast at Hubbard’s on Main Street. During our visit he challenged me to come up with some creative ideas to fund dog parks. He said he thought Garland should really have about scattered around the city. My idea at the time was to have the city partner with some corporate entity like Petsmart or Petco. I bet there are many other good ideas out there, too. If you have a suggestion, or would just like to weigh in on the subject, please contact me: