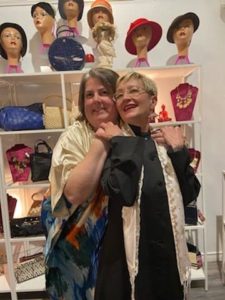 A New Year, at the doorstep of a new decade, and a time for introspection. For many of us it’s a time for resolving to do better and be better human beings in this brand new calendar year. At the end of the year a Burning Bowl Ceremony  can help participants focus more clearly on clearing the negativity that is holding themselves back from being their best possible selves. Tracy Claybrook and I have experienced the Burning Bowl Ceremony previously, and began to plan to share one at the end of 2019. My personal experience with the ceremony had been in churches, and Tracy had experienced an outdoor ceremony while she was in Iceland. Tracy decided we should hold the ceremony at her store, Frocksy, in Downtown Garland. Her business partner, Karin Wiseman, agreed and we invited friends to join us. It was a New Year’s Eve party, and there were snacks and beverages for toasts. John Wiseman tended the fire in a small Weber grill out on the store’s patio. Pens and paper were provided for us to note the things that were preventing us from being our best selves, things we did not want to bring into the New Year.

Tracy, a newly ordained minister, had gone online and gotten herself the title of “Reverend”. So, the “Rev. Dr. Tracy Claybrook” conducted the ceremony, wearing black cossack and glittering white fringed stole made especially for the event by Juanita Lopez. Our newly minted and smartly attired minister led us out to the patio and, after a talk, invited each of us to drop our stumbling blocks in the form of small paper notes to the flames. The symbolism is powerful, and I for one felt greatly relieved, having rid myself of my negative tendencies. We were outside in the dark of night, but the flickering flames revealed tears on faces in our group. After all the small slips of paper had been incinerated, we followed our leader back into the store via the back door. We toasted to fresh starts in a new year, and donations were made to Good Samaritans of Garland. 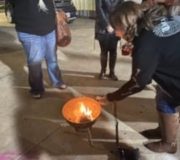 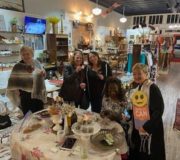 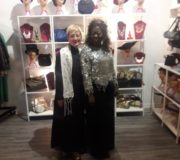 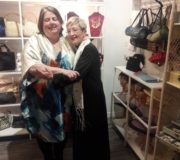 It was enjoyable, yet very meaningful, and a great way to end the year and begin a new one. As our small crowd dispersed, we vowed to meet again next year for another Burning Bowl Ceremony. There was little activity around the downtown square at midnight, but there was a certain peaceful, easy feeling among those of us who felt like they had just shed some of their greatest faults. If we haven’t shed them, we’ve at least acknowledged them, and that’s a step in the right direction. Personally, I’m hoping those flames did their job. Thank you Tracy Claybrook and Karin and John Wiseman for a fabulous beginning to 2020.