Garland ISD’s Latino community took the spotlight as Hispanic Heritage Month was celebrated throughout the district Sept. 15 through Oct. 15. Several schools highlighted the nation’s celebration of the Hispanic culture with special activities, guests and programs. 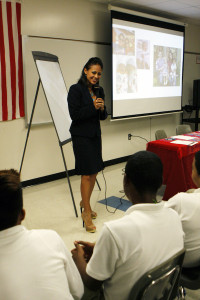 “The process of setting this visit up usually takes a couple of months,” Ortega said. “However, Cynthia was so nice that she agreed to come with a two and a half week notice. I believed her struggles and accomplishments would be a great example for our GAEC student population. Cynthia represents women, hardworking immigrants and is truly an honorable representative of our Hispanic community.”

During the event, Izaguirre spoke about her Ecuadorian background, her poverty-stricken childhood and how having a positive mindset helped her beat the odds.

“I am here talking to each and every one of you because in many ways, we are really not that different,” she told the students. “I reached my lifelong goal because I had the right attitude and motivation.”

After her speech, Izaguirre had students present a mock newscast—a small activity that brought the event full circle.

“It was an inspiring visit,” Ortega stated. “It was dynamic and the kids enjoyed participating in the hands-on activity. They were engaged, enthusiastic and inspired. I hope they can relate to her story of hard work and perseverance.”

While GAEC celebrated on an encouraging note, Cisneros and Parsons prekindergarten schools honored the cultural observance with a fashionable twist. Both campuses hosted Hispanic Heritage parades.

And as they do every year, the district’s Mariachi Estrellas paid tribute to Mexican heritage as they entertained campuses across the district. The often-requested act performed popular Spanish language compositions at nearly 20 district events from September to October.