On Thursday, September 11 a crowd of approximately 200 concerned Garland citizens attended a public hearing at the Plaza Theater. City officials went into painstaking detail in their elaborate presentation of development code updates, such as landscape guidelines, parking, and density as it pertains to zoning.

The majority of those in attendance were Eastern Hills residents, concerned about the development of the Eastern Hills Country Club property. At issue is the impact a housing development will have on property values in the surrounding upscale community.

At the end of the evening, the crowd left the hearing with more questions than answers. Since the country club and its nearly 200 acres went into bankruptcy and subsequently sold at auction, rumors as to the future of the golf club that had been the heart of the community since 1954, have been rampant. One founding member of the private club believes the property was originally donated with the provision that it remain a golf course or park for 100 years. However, the existence and legal viability of such a trust surely would have been addressed before the sale to developers. 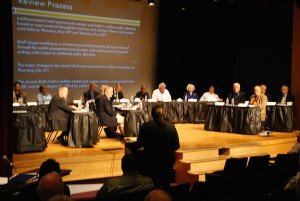 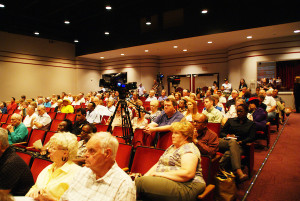 Further public hearings on development code are scheduled for the following two Thursdays, September 18 and 25, if needed. Again, they will take place at the Plaza Theater and begin at 7 p.m.

Previous: Greatest Cleaning Tool is in Your Pantry
Next: Plaza Theatre: October Calendar