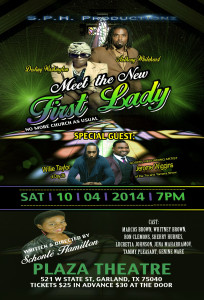 “Meet the New First Lady” is an inspirational stage play about a powerful woman named Delilah. Delilah is beautiful, strong and determined to build a legacy that will never be forgotten. However when her past resurfaces, her fairytale life is threatened and she will do everything she can to make sure her past is disappears. Performance is October 4 at 7 pm at the Plaza Theatre. Tickets are $25 in advance and $30 at the door. Email Schonté Hamilton at sphproductionz@gmail.com for more information or to purchase tickets in advance.

GreaterTunaSMUActors Anonymous Theatre Company presents an ENCORE presentation of Greater Tuna by Joe Sears and Jaston Williams at the Plaza Theatre in downtown Garland, October 10 and 11, 2014 at 8:00 p.m. Tickets are $10 at the door and seating is first come, first served. Join the Drama Kings and Queens as they bring this small town comedy to life! Starring Rhonda Hill-Martin, Boby Prewitt, Shelly Hansen James, Bill Chesnutt, Derek Stewart, Louise Robertson, Justin Clark, Trevor Stewart and Tristan Stewart, directed by Lory Stewart. What do Arles Struvie, Thurston Wheelis, Aunt Pearl, Petey Fisk, Phineas Blye and Rev. Spikes have in common? In this hilarious send-up of small town morals and mores, they are all among the upstanding citizens of Tuna, Texas’ third smallest town. Tuna’s citizens parade across the stage in all their outrageous and irreverent glory, commenting on life, politics, and what makes them (and sometimes us) tick. All proceeds will benefit the Garland High School Speech and Debate team. More information available at www.thedramaqueens.com 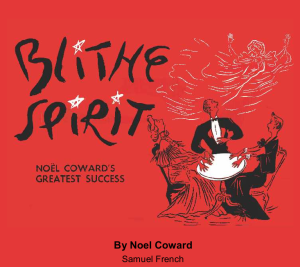 This smash comedy hit offers up fussy, cantankerous novelist Charles Condomine, re-married but haunted (literally) by the ghost of his late first wife, the clever and insistent Elvira who is called up by a visiting “happy medium”, one Madame Arcati. Performances are October 23, 24 & 25 at 8 pm and October 26 at 2 pm. For tickets visit GarlandArtsBoxOffice.com or call 972-205-2790. For more information call 972-977-7710 or visit CORPtheatre.org.