How to take on stinging insects and win

Nothing ruins an open house or takes the fun out of hanging out in the backyard quite like the “ouch!” of a sting from a bee, wasp or yellow-jacket. Not only that, but many of them can take up residence in the walls and eaves of your house. And with spring upon us, your odds of finding the little (and not so little) guys has greatly increased as they emerge this season and begin to forage and build nests.

Most of these insects don’t want to be bothered so leaving them alone is the best strategy, bug experts say. But sometimes that nest is unavoidable — dangling right over the front door, for instance.

What to do? Here are some common stingers and how to handle them. 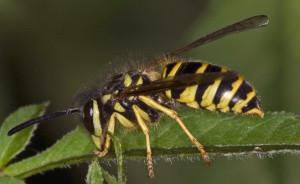 1. Know your foe: Yellow-jackets, a catch-all term for several species of wasps, are about a half-inch long with jagged bands of bright yellow. They frequently nest in ground cavities that once were rodent burrows. But they can also build papery nests in wall voids of buildings, as well as nests as large as basketballs in trees. Why exorcise them: When people talk about stinging, flying insects, they’re usually thinking of yellow-jackets. They can form hives of between 1,500 and 15,000 insects. What’s more, these wasps can and do sting repeatedly when angry — and they defend their nests more aggressively than others.

Stake in the heart: “The first thing I say to somebody if they’re trying to get rid of the nest is, No. 1, ask yourself if you really need to do this If it’s not really presenting a threat, then it may be better to leave them alone rather than deal with aggressive yellow-jackets.

Next step: Cover or remove any food sources that seem to attract them, such as trash cans and pet food. If the yellow-jackets are causing real problems, spring is the best time to try to nip them in the bud, experts say. In spring there is a 30- to 45-day period when new queens first emerge before they build nests. Trapping queens during this period can reduce the yellow-jacket population for the season.

If a nest has already been built, however, here’s what to do: In daylight, find the entrance to the nest and mark it in a way that will help you find it at night. Return to do your dirty work at minimum two hours after dark, because if you’re going to try to treat the nest — spray it or something like that — you want everybody to be home.

“I often recommend that people bring a flashlight with a red light,” or with a piece of red cellophane over the light, because yellow-jackets can’t see red. Tread softly and gently with a pressurized spray can of insecticide designed for wasps and hornets; The key word is that it should say wasp and hornet jet spray, That means it shoots out a solid stream of material.

If you’re dealing with a ground nest, sprays sometimes don’t work because the actual nest is farther underground than the spray can reach; try pouring a quart of liquid wasp-and-hornet insecticide

For aerial nests, spray the entrance hole from as far away as possible, then stay away for at least a day.

For yellow-jacket nests in a wall, it gets a lot trickier. Why? Because sprays or even insecticide “dusts” often don’t reach back to the nest and can even push the yellow-jackets deeper into a home. This is a good time to call in the cavalry — in the form of a quality pest-control company.

A caution: Wear protective clothing, including eyewear and gloves, when battling 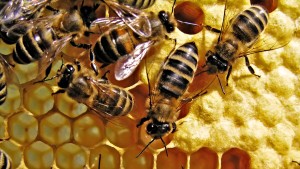 2. Know your foe: Honeybees and bumblebees

Honeybees are about a half-inch long and are light brown to black. Bumblebees are up to an inch long and are often black and yellow. Both are quite hairy-looking compared with hornets and yellow-jackets. Contrary to popular belief, these are among the least threatening of the stinging insects we’re talking about.

Bumblebees like existing cavities (often on or near the ground) such as old mouse nests or even bird nests.

Why exorcise them: Honeybees can be a nuisance in spring at birdfeeders and pools as they forage for water. They’re not often a problem later in the year, though they will sting in defense of the nest. However, they can also nest in hollow trees or in the wall of a house and cause problems when they

create a hive in the latter. The queen bee and a few worker bees can also survive the winter.

Bumblebees are normally only a problem if the nest is close to human activity.

Stake in the heart: 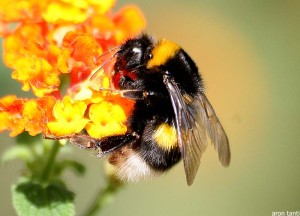 If the honeybees need to be dispatched — if they’re in your walls, for instance —inject about four ounces of deltamethrin-based pesticide such as Delta Dust into the nest. You should repeat the treatment within seven days.

You’re not done: After the nest has stopped functioning, open the wall and remove everything — bees, honey, wax. Remains can attract pests such as mice and dermestid beetles.

Control of honeybee nests can be challenging, a homeowner should consider hiring a professional pest-management company or a beekeeper, who could corral the bees.

If you must control bumblebees, spray or inject a powdered insecticide into the nest. Another way to treat a ground nest is to pour soapy water into it. This, too, should be done after dark. Use a flashlight with a red lens or covered with red cellophane.