Pete Welk’s run-ins with the law began when he was arrested in January 1921 along with friends Roland Ayler and J. E. Page for operating a 60-gallon moonshine still on lower Rowlett Creek. 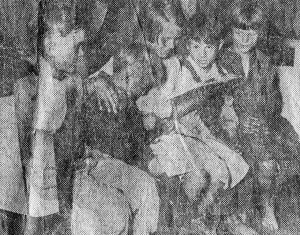 Sidney “Pete” Welk and his siblings

John Sidney (“Pete”) Welk was born in 1893 in Sachse, son of German immigrant Nicholas Welk and his wife, Cynthia Richards. By 1900 the Nicholas Welk family were tenant farmers somewhere between Rowlett and Rose Hill. Apparently Pete’s 1921 arrest was no discouragement to his lucrative bootlegging business. It was, after all, during Prohibition days.

On 21 December 1922, Pete and three of his friends were surprised at their still in the woods by sheriff’s deputies Hilliard Brite and Tom Wood. A shoot-out ensued and Wood was fatally shot. Welk and his partners were arrested and jailed at Dallas. Deputy Wood’s funeral was attended by most Dallas County officials and a large contingency of the Ku Klux Klan. 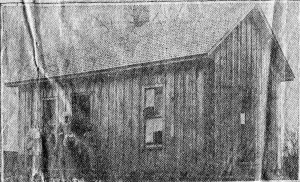 Welk, Clayton Coomer, and Henry Belcher were charged in Deputy Wood’s murder. Welk was sentenced to 40 years and Coomer and Belcher, each to 10 years. Belcher’s sentence was overturned on appeal. While Welk was being held in the Dallas County jail he formed a close friendship with Charles E. Gaines, a postal bandit, who had already been sentenced to death in the electric chair. Welk had many friends and someone smuggled two pistols and ammunition into his cell.

On 26 September 1923 he and Gaines attempted an escape by overpowering the night guard, Deputy W. G. Champion. Champion and Gaines were killed in the ensuing firefight and Welk was shot in the face and upper chest. Welk recovered. The person who smuggled the weapons to Welk and Gaines was never identified but rumor had it that it was a deputy who had been bribed with $1,000. Even before the appeal of his 40-year sentence for the Wood killing had been heard, Welk went to trial for the murder of Deputy Champion. He was convicted of the Champion killing on 22 October 1923 and was sentenced to execution in the electric chair.

On 29 February 1924 the Garland News reported that Pete Welk, still in county jail, was seriously ill. Three months previously his mind had become affected, he refused to speak to anyone and apparently didn’t recognize his wife. Shortly thereafter he was pronounced to be insane. Now during the night he had suffered some sort of seizure and began calling out for Gaines, his accomplice in the attempted escape. The next day he would not talk, but mumbled to himself.

The date of Welk’s appointment with the electric chair at Huntsville was set for 3 April 1925. The state board of pardons refused to intervene and a last-minute petition for a writ of habeas corpus to the federal court of appeals was rejected. 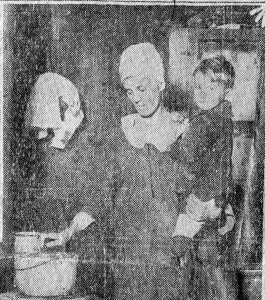 By the time of his execution Pete Welk’s infamy had spread nationwide. But perhaps as much newspaper coverage was given to his pitiful family as to his crime. Welk and his wife, Willie, had five children at the time of Pete’s execution: Olan, 11; Pauline, 9; Vera, 7; Talmadge, 6; and Joy, 3. The family were tenants on a farm in the Chiesa neighborhood owned by Millard Flook, of Garland, and occupied what a visiting newspaper reporter called a “ two-room shack” on the property. There were wide cracks between the wall boards and broken window panes which allowed the elements in, but the reporter remarked that the interior of the house and the children’s clothes were clean.

Only a few days earlier Flook had announced that he had rented the farm to someone else and the Welks would have to vacate. Willie Welk told the reporter, “I have done all I could. No one can say that I haven’t stood by Pete in his troubles. I have sold everything that we owned to try to save the poor boy’s life—and all for nothing. And only three years ago I could name my last baby ‘Joy’!” The family had recently returned from a visit to Pete in the Huntsville prison and little Joy wanted to go back to see him, “I know we haven’t got a car, but we could walk since it is not very far.” And Vera asked , “How are we going to have a funeral for Daddy, Ma? I thought funerals were for dead people.” Stories like this in the Dallas paper touched the hearts of readers and donations to the family began arriving from far and wide. The Rowlett bank set up a trust fund for them.

On the day before his execution Welk was visited by the Dallas County sheriff, Schuyler Marshall, who hoped to persuade him to reveal who supplied him with the gun used in his attempted jail break. Welk presented the sheriff a red rose and another for Murray Fisher, chief jailer at Dallas. He asked the sheriff to deliver to Willie his parting request that she not remarry until the children were grown. But he told the sheriff nothing else. Welk, who was said to be “inordinately proud” of his long, wavy black hair had requested that his head not be shaved until the day before his execution.

A last-minute request to Governor Miriam Ferguson for a reprieve was denied. As Welk was conducted to the execution chamber he asked to say goodbye to Lavannie Twitty, a black man, also on death row. He shook Twitty’s hand through the bars and wished him better luck than he himself had had. As Welk was seated in the electric chair the sheriff again asked him to reveal the source of the smuggled weapon but he replied that he wished he could but that he could not. The metal cap was placed on his head and his eyes blindfolded. As the attendants strapped him in the chair Welk said, “Take your time, and have the best of luck.” At 12:15 a.m., Friday, 3 April 1925, Warden N. L. Speer threw the switch sending the current through Pete Welk’s body. After the second electrical jolt Welk slumped in the chair, and four minutes after the third jolt he was pronounced dead.

Willie Welk awaited the time of her husband’s execution in the prison ward of the Dallas County jail. The attending matron reported that Mrs. Welk at the dreaded moment shook convulsively and wept. It had been feared that Pete Welk’s aged and sick mother, who lived in Rowlett, would not be able to survive the shock of his execution. It was reported that at the time of his death she sobbed, “They’s killed my baby. I wanted to go and be with my baby, but I reckon I will have to stay here. But I’ll be with him some day.” 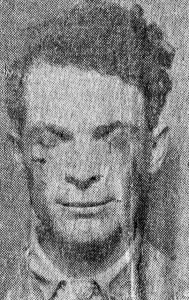 Cecil Williams, Garland undertaker, donated his professional services. At first a funeral was planned for the Rowlett Christian Church, but later, probably because of the predicted size of the crowd, plans were changed to a graveside funeral at the Big A Cemetery northeast of Rowlett. A committee of the women’s auxiliary of the Dallas Ku Klux Klan supplied the Welk family with funeral clothing and groceries. At the cemetery two wash tubs were placed at the entrance for visitors to drop donations for the destitute family. The whole proceeding had a circus atmosphere, vendors selling soda pop and hot dogs. It was estimated that some 6,000 cars were parked within a mile and a half of the cemetery. When the hearse arrived several women in the crowd fainted. It took over two hours for all the curiosity seekers to file by the open casket. By the time Pete Welk was lowered into the ground the wash tubs at the cemetery entrance had collected $799.59.