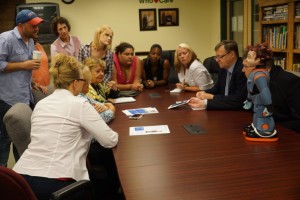 We were invited to a robot demonstration at the Achievement Center of Texas by its Executive Director, Marilynne Serie. She was extremely excited about her discovery of a robot programmed to train and teach people with autism. There are currently 40 students attending ACT. Serie explained that one of the most common symptoms of autism is the avoidance of eye to eye contact with other people. Therefore, a robot may very likely be a more effective instrument for training and teaching students than an intimidating human being, and this may create a more comfortable environment for learning. Based on that hypothesis, a robot designed to resemble a young boy was created by Robokind, a Dallas based company and given the name of Milo. 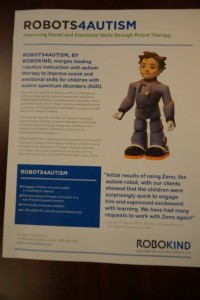 On July 17 about 12 of us gathered around a table in the library at ACT to witness the demonstration. Claude Bove, a representative of Robokind, introduced us to Milo, an adorable robot, approximately 2 feet tall, with a face capable of expressing emotions. He walks, talks and steals your heart with his facial expressions. This is an important feature because another characteristic of autism is the inability to read and connect with the emotions of others. In addition to training modules programmed to develop social skills, there are also teaching modules on subjects such as math and science available in 16 languages. The module used in the demonstration dealt with social skills and the ability to recognize expressions of emotions, specifically happy, sad, angry and fear. Milo portrayed those emotions with facial expressions and the student would be asked to identify the correct emotion by selecting the answer from multiple choices on an iPad. 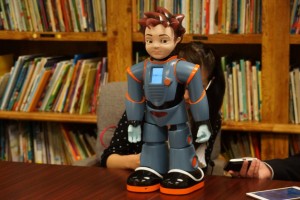 The programs are individualized and Milo’s eyes are cameras, recording feedback that enables therapists to chart a students’ progress. There is also a chest monitor for the student so that Milo can feel the student’s emotions. A lesson set-up would be Milo and a student interacting one-on-one; the student responding to the robot with an iPad, and a therapist, teacher or facilitator present to assist when necessary and note difficulties and progress. Robots4autism is a project that has been in the works for 4 years and is constantly being perfected. Milo’s original sticker price was between $16,000 to $17,000, but Mr. Bove stated that Robokind will be producing the robot overseas at a lower cost and would be willing to partner with the Achievement Center at the lower cost in exchange for feedback and data that will assist in improving Milo’s programming and interactions with the students.

Here’s what Robokind has to say about their Robots4autism product: 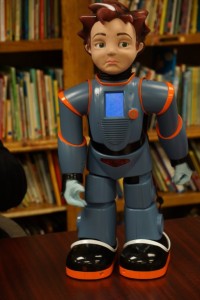 The robot has been designed by leaders in robotics, artificial intelligence, software engineering, autism therapy and education. Robots4autism uses innovative and interactive robot generated instruction to teach social understanding and improve a child’s ability to comfortably and appropriately respond within natural context. Developed by Robokind in collaboration experts at the Autism Treatment Center and the School of Brain and Behavioral Sciences at the University of Texas at Dallas,

Marilynne Serie believes that Milo would prove to be of great benefit to her students with autism and hopes they will find a way to fund the project. She concluded, as we did, that one did not have to be autistic to benefit from Milo and its programs. Claude Bove mentioned that Robokind‘s goal is to be able to produce a robot that would be affordable for home use. He also informed us that there is a female counterpart to Milo in the works, and her name is Alice. Since autism affects boys over 100 times more frequently than girls, there is a far greater number of autistic students who will identify with Milo. Bove mentioned that autism is on the rise, now affecting 1 in 67 children. 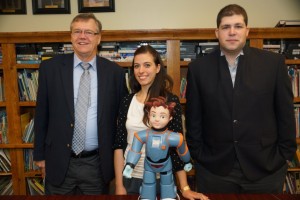 Among those present at the demonstration was an observer from Italy, ACT staff and teachers, Tiffany LeMay, a speech pathologist, Linda and Wesley Jaresh and myself and Jacqi Serie who is doing a Master’s research project on Robots4Austism at the Univeristy of North Texas. It’s safe to assume that each of us would agree that the Achievement Center of Texas should indeed find a way to obtain Milo, and that everyone would benefit from Milo’s presence and training capabilities at the center.

Previous: Rowlett Criminal the First White Man in Texas to Get the Electric Chair
Next: New Construction & Openings