Around Town in September

The City of Garland has announced that residents will be allowed to water their lawns weekly, on their normal garbage pick-up day. This change will remain in effect through the month of October.

September marched into Garland to the tune of brass band and throngs of happy parade-goers. The Labor Day Parade, billed as the “Biggest Labor Day Parade West of the Mississippi,” marched along a different route this year. Organized by the Garland Noon Exchange Club, the parade had to circumnavigate obstructions due to construction sites and road repairs in progress. This year there was a market on the square and classic car show following the parade, lasting until late afternoon. 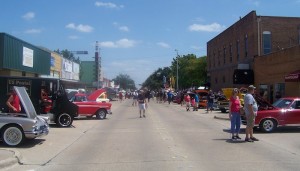 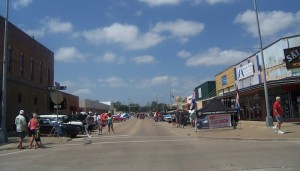 Get your numbers! It is in everyone’s best interest to know what in district they live and which city councilperson represents that district. They step forward to represent the citizens living in their respective districts, ad are happy to help. When a problem arises, or if you have a question relating to city government, your Councilman or Councilwoman will be able to help. They are there to serve you and make decisions that are in the best interest of their constituencies. 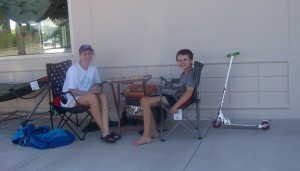 On September 2nd we were notified of campers lining up outside the new Krispy Kreme on Lakeview Parkway in Rowlett. They would be opening for business in 2 days and the first customer would be rewarded with a year of free donuts. We followed up and found a mother and son from Allen – Vicki and Grayson Ireland – camping alongside the new building. Vicki Ireland and her 12 year old son were playing a board game and looking quite content while seated at a small table placed between a hammock and pup tent. The home-schooling mom explained how she had researched other Krispy Kreme openings and learned that it was necessary to get in line 2 days before the opening if you were to receive the punch card with 52 spaces, each representing a dozen free donuts. 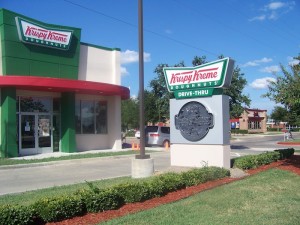 The next evening, a crowd of Krispy Kreme fans were camping out behind the Irelands and many were dancing to music provided by a D.J. The rest of the parking lot campers would be receiving punch cards for 12 dozen free donuts. At 5:30 the next morning, the new Krispy Kreme opened its doors and presented the weary, but happy campers with donuts and the donut gift cards. And now we know who put the “nuts in donuts!

Garland Mayor Doug Athas has informed us that there are plans to fill the black pit in the center of the downtown square that was once part of the water feature, with dirt and plant grass to cover its surface. He also mentioned that the Garland Youth Council will be erecting and maintaining a public blackboard on the vacant lot at State and Fifth Street. Everyone will be invited to bring their own chalk and make their own posts.