Beer for Life at 507 State Street 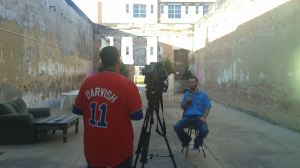 Cool, a little crazy, and definitely an event to remember! It all began when a young brewmaster contacted Robert Smith, owner of the property at 507 State Street in downtown Garland. It is a burned out shell of a building with no roof or plumbing, just blotchy bare brick walls and a concrete floor. Smith would like to find a tenant and finish out the building according to its needs. But for now 507, having been boarded up after a fire and condemned by the city 15 years ago is an event venue! A sign in the new window reads, “Think of the possibilities.”

Brewmaster Cary Hodson, 28, approached Smith with the idea of creating a brewpub on the promises. Hodson’s only problem is a lack of financing. He’s been brewing his Intrinsic beers in his home and entering them into various craft beer competitions in hopes of raising enough money to launch his brewry. Hodson has also launched an online crowd funding project. He is also offering a lifetime of “free” beer to anyone who makes a $2,000 investment in Intrinsic. That is the genesis of the event that occurred on November 8.

Intrinsic Brewing can’t yet sell beer legally, but they can give it away. Craft beer fans were tweeting and TV stations picked-up on the quirky nature of the event, and the crowds appeared. They entered the shell of a building to the music of The Gypsy Playboys, acoustic musicians playing tunes from the 50’s and 60’s. Throughout the afternoon there was a long line of folks waiting to sample a variety of Intrinsic’s brews, including their prize winning Basil Buzz and Sangria, my personal favorites. 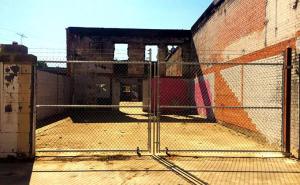 In an opposite corner one could enjoy “gourmet popsicles” by Steel City Pops. Among their frozen concoctions were pineapple jalapeño, coffee, and butter pecan. These refreshing treats were especially enjoyed by all the kids in attendance.

Through a brick archway was an area that had been pitched as a “Food Truck Loft.” The food truck was Rock’N Roll Tacos and they definitely rocked and rolled every minute of the entire event, with long lines of appreciative customers who raved about their brisket tacos and other offerings, many of which sold out.

For this sunny November afternoon, Downtown Garland was a very cool place to be, thanks in great part to the vendors and band from Deep Ellum. The event was edgy and virtually vibrated with excitement. During those afternoon hours, one sensed the dawn of a new era of innovation, growth, and prosperity for the rundown old town that wants to be so much more than it is.

The next event at 507 State Street will take place in conjunction with the City of Garland’s annual Christmas on the Square, scheduled for Thursday, December 4. It may get just a bit frigid inside a building without a roof when Santa comes to town!