Ecolab, the global leader in water, hygiene, and energy technology and services, continued a 27-year partnership with Garland ISD Sept. 4 by gifting $50,000 to district teachers in the Harris Hill Administration Building. 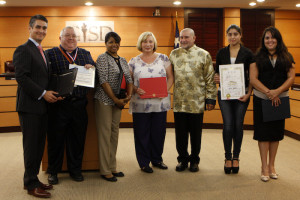 “A company maintaining a partnership with a school district for nearly 30 years is a rare, but very special,” said Garland ISD Education Foundation President, Lisa Cox. “We are lucky and so thankful to Ecolab for supporting our teachers throughout the years.” 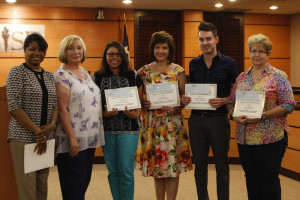 Superintendent Bob Morrison with an honorary black belt and certificate, which Deputy Superintendent of Business Operations Rene Barajas accepted on his behalf.

“I could not have thought of a better way to end the ceremony,” Cox commented. “It was a neat gesture that summed up how we all feel about Ecolab’s sponsorship.”